Ladies and gentlemen, hold onto the edge of your seats. It’s my pleasure to bring you the first faculty interview for 2015! Keynote speaker, Robert Liparulo, took a few minutes out of his crazy busy schedule to share some wisdom 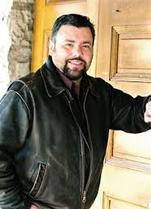 Ralene: How did you get started in the writing world?

Robert: I knew I was going to be a writer when I was in third grade. In fifth grade, I wrote an article that my teacher sent to magazine, without telling them my age. A few months later, I got a check and a few copies of the magazine with my article in it. I was hooked.

When I was twelve, I read I Am Legend by Richard Matheson. For about half the book, the main character, Robert Neville, tries to get a sick dog inside his home. When he finally does, he spends the night gently caring for it. We realize that the dog represents everything that used to be—picnics with family, hanging with friends, kids laughing on a playground—and that will never be again. The last line of the chapter was something to the effect of ,“In the morning the dog was dead.” That hit me hard, and I started crying.  I thought, “If words—only WORDS!—can make a pretty tough 12-year-old boy cry, I want to do that.”

Through my teen years, I wrote for magazines like Ranger Rick and Highlights for Children; then moved into adult magazines like Rolling Stone. For many years, I wrote articles and columns for a slew of magazines and newspapers. I started interviewing celebrities, including authors. A few of them became friends, and when they found out my dream was to write novels, they nagged me about pursuing it. I finally started writing Comes a Horseman, mostly to stop their nagging. When it sold and I secured a few contracts to write others, I was able to quit my day job of writing articles and focus on novels.

Over the years, I’d written a few screenplays that sold (including the script to Ted Dekker’s Blessed Child, which sold to Gener8xion Films), none of which made it to the big screen. I have two contracts now to write screenplays, one based on my own book and one original, which I’m writing with Andrew Davis, the director of The Fugitive, The Guardian, and Holes. I consider myself a storyteller more than a novelist.

As a journalist and magazine writer, I was frustrated that I was spending my time in nonfiction. But when I started writing novels, I realized that the lessons I learned writing nonfiction were invaluable to my writing novels: how to interview and research, how to write concisely, how to hook a reader, how to meet deadlines, etc. Any writing you do will hone your craft and could be applied to any other kind of writing. I no longer regret those years in the wilderness, writing nonfiction.

Ralene: What was the first actual novel you ever wrote? Did it get published?

Robert: When I was thirteen, I started writing a James Bond-type novel. I never finished it, but I found it years later, and it wasn’t half bad. I ended up using a lot of its ideas and actual scenes in Deadlock, my fourth published novel.  At nineteen, I wrote about half a novel called  The Evil, about territorial spirits. It garnered some interest at  a major publisher, and they offered me a contract. But I was uncomfortable signing without finishing it. I didn’t believe in myself at that point. I never did finish it, which I chalk up to my youthfulness (and stupidity). The first novel I finished—and published—was Comes a Horseman.

Ralene: Why do you write? What do you get out of it?

Robert: It sounds like a pat answer, but I write because I was wired to write; God made me a writer. There’s a line from the movie Chariots of Fire that perfectly describes the feeling: “When I run, I feel God’s pleasure.”

When I write, I feel His pleasure.

I’m believe that when I write, I’m fulfilling my purpose. God loves to shower us with blessings when we’re operating within His will, so there are ancillary benefits to writing—I love creating worlds and characters and exploring how people might behave in certain circumstances, I love hearing how my words affect readers, I love figuring out the best way to put forth ideas, to paint images in readers’ heads.  But foundationally, it starts with having to write, needing to write.

Ralene: Do you have a process you go through before tackling your blank page?

But the number one thing I do is I become my main characters, and some supporting characters, for a time before trying to write them. I walk in their shoes, try to figure out how they look at the world. Everyone sees the world a bit—or a lot—differently from other people. Their upbringing, their careers, their beliefs uniquely hue and shade everything they see. I try to find those variations in each character.

When I wrote the Dreamhouse Kings books, which were told mostly through the eyes of a twelve-year-old, I played soccer with my son’s friends, ordered kids’ meals at restaurants, went to theme parks, saw a lot of kid movies, tried to become twelve again.  I don’t write character bibles; I try to be the characters.

Robert: I make my living writing full time.  I don’t write every day. I spend months preparing to write, researching and living my characters, as I mentioned. This part of the process looks pretty normal, time-wise. I work a standard eight- or ten-hour day.

When I write, normalcy goes out the window. I practice “immersion writing”: everything is about the story–feeling it, living it, being in it. Eighteen-, twenty-hour days. When I look up from the computer monitor, I don’t see my office; I see what the point-of-view character would see, wherever he or she is—a forest, an airport, some underground bunker. It’s a bit insane, not the healthiest lifestyle, but I don’t know how to write any other way.

Ralene: As the keynote speaker for Realm Makers this year, in what ways do you hope to inspire the writers in attendance?

Robert: I hope to communicate my own struggles and doubts as a writer, the times it felt I couldn’t write a convincing grocery list, the times I couldn’t find the time to squeeze in a sentence, the times when it seemed the distractions and fires to put out would never end, when nothing in my mind seemed original or interesting, when the competition—in both quality and quantity—felt insurmountable, impossible to shine through.

And how persistence and resilience and determination and passion—especially passion—overcome it all. Somehow, it happens, you write something that dispels self-doubt, that shrinks the struggles to nothing, that gets attention, gets people talking and readers reading. Then, not only do all the sleepless nights and setbacks and frustrations not matter, they become essential to your stories, your characters; they become the grit, the sandpaper that hones your writing into  something that transcends the common, the usual. All of it—the good, the bad, the hard work, the joy—comes together and you write something truly special.

Ralene: Do you have any advice for first time attendees?

Robert: Eat it up. Do it all. Exhaust yourself. Rest when you go home. Take notes, compare notes, engage with everyone. Don’t be afraid to insert yourself into a group of people talking, to introduce yourself to everyone—the ones there because they represent where you want to be; the gatekeepers; the ones still trying to figure it all out. Drink gallons of coffee. Ask questions, talk a lot, listen more. Go to as many classes and seminars and roundtables and get-togethers as humanly possible. Collect business cards and bookmarks, emails and phone numbers. Stay in contact later. You never know who’ll throw out the one piece of advice that tips the balance of this game in your favor or motivates you to write the one line that just won’t get out of an agent’s or publisher’s head or suggests a contact that leads to landing a contract. This is the time to see and be seen, to hear and be heard.

Thank you, Bob, for spending a little time with us today. Your advice and experience is invaluable, and I’m sure we’re all looking forward to hearing you speak at the conference in August. Blessings on you as you prepare to share your insight and wisdom.

13 thoughts on “Inside the Mind of Robert Liparulo”