Today we welcome to the blog the lovely Katie Morford of Crosshair Press to share a little about herself.

What are you most looking forward to about the conference?

I’m most looking forward to connecting with other amazing creatives! I’ve kept up with friends on the Realm Makers alumni page, so it’ll be great to see them again as well as meet new friends. 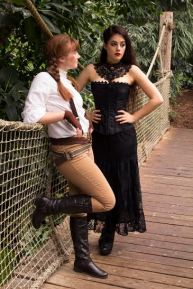 Will you be coming in costume for the awards banquet?
Yes, I will definitely be coming in costume! Costuming is a bit of a stretch for me, as I’m not really a crafty person, but thankfully I have several talented friends who will be lending helping hands, so I know it’ll turn out amazing. The other Crosshair Press ladies (Amy Williams and Amy Davis) and I will have coordinating costumes in honor of one of our upcoming speculative releases!

If you could visit anywhere in the world, where would you go?

This is a fun question because I’ve spent the last three years globe-trotting with an international missions organization media team, so I love to gain inspiration from visiting new places! If I had my choice, though, I’d go back and visit New Zealand. It’s the most naturally beautiful place in the world, in my opinion, and the people are really lovely as
well.

How many books have I read so far this year?

I almost picked how many books do I own, but that number is sadly depleted since I moved home from England last December and had to cull my collection to fit in my suitcases. However, I’ve read probably 1-200 so far this year. I sort of lose track. I’m a very fast reader! 🙂 Favorites so far, though, are “Meg Mitchell and the Secret of the Journal,” the new YA urban fantasy from CP (yes, I know I’m prejudiced, but it’s seriously fabulous) and “Third Daughter” by Susan Quinn, a quirky Bollywood-meets-fantasy-steampunk novel that was surprisingly fun with beautiful world-building.

What book has made the most impact on you?

A hard question with multiple answers, depending on the kind of impact. However, I must say that the book(s) that made the greatest impact on me as a writer are the Mark of the Lion trilogy by Francine Rivers. They were the first books I read with strong Christian AND non-Christian characters, as well as believable historical world building, but most of all she tackles deep Christian and philosophical struggles, as well as character conversions, in a real and relatable way. They were the first fiction books to really make me think and re-evaluate my assumptions about life, and force me to grow in my faith as a result.

How many books did you write before being published?

If you count completed stories of 30,000 words or more, probably 11 or so. I wrote stories with my friends growing up, including multiple-book series. One of those series actually grew up to become my first book published (last year), Kenan, a romantic suspense thriller set in the near future.

What was the inspiration behind your most recently published work?

In my international travels these last three years, I saw many examples of racial prejudice and misunderstanding, especially toward Arabic peoples. I wanted to show that people we don’t understand, who are different from us, are people too and need God’s love as well. That became the underlying theme behind a fun, high-action novel featuring a team of Turkish hit men gone rogue who are helped by an American doctor and her friends. It’s set in the near future (for example, the Arabic Nations have joined into a confederation similar to the EU) because I wanted to incorporate social commentary on where I see the world going and cultures being shaped by current events. As a fun side note, I’ve actually been to all but one of the countries the characters visit in “Kenan.”

Best writing advice given to you? “Write the story you want to read.” That advice actually gave me the freedom to co-author Kenan and make it that quirky mix of fun, adventure and snark with deep characters and underlying social commentary. Many of my author friends favor extremely complex plots and world-building with profound symbolism. That’s not me. I’m like, “Let’s laugh lots and go on adventures with some really awesome people.” And then I write that book. 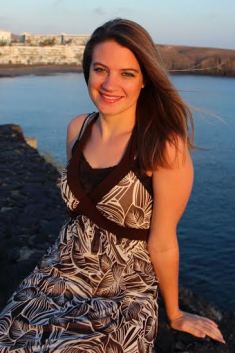 Katie Morford is a writer, photographer, blogger (www.storyforhisglory.com) and producer. Infected with the travel bug, she’s traveled to over 30 countries as a media missionary. She’s a founding editor at Crosshair Press and serves as the primary content editor when not busy with her own freelance editing projects. Katie writes romantic suspense, space opera and steampunk and considers dark chocolate the key to a creative life.

2 thoughts on “Into the Mind of Katie Morford”