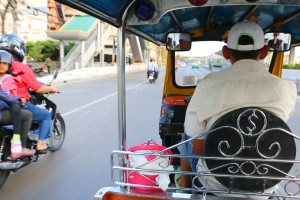 Damp air whipped through my hair, my knuckles clenched on the grimy metal seat of a tuk tuk as it swerved and wove through a colorful swarm of honking vehicles. A monk in orange robes crosses the street in front of us, and an old woman at the corner pineapple stand gives me a gap-toothed grin. Welcome to Bangkok! Welcome to the most obvious element of culture—environment.

But my experiences traveling to over 30 countries around the world have taught me that a deeper, even stranger system of values, gender roles, and beliefs runs beneath the colorful exterior and shapes everything I’m seeing and experiencing.

In my travels I’ve interacted with diverse cultures on multiple levels. But in my current profession as a fiction editor (especially since I specialize in “soft” speculative fiction) I’ve also had many opportunities to observe authors’ most common problems when it comes to cultures, setting and world-building in fiction.

Since I see the same issues repeatedly, I figured I would share the five most common problems I find in manuscript in regards to world-building.

• Are primitive and advanced technologies co-existing? If so, is there a very compelling reason for this to occur? The reason needs to fit with the rest of your world.
• How do they function in real life? Often in fictional worlds there is no provision for meeting people’s (or aliens’) basic needs. Don’t let your characters starve.
• Are there “modern” objects or slang in a fantastical world? There is no Ketchup in fairy land. Not to say that this can’t occasionally be done well, but usually it just throws the reader out of the story.

• Does the culture value individuality (like America) or community (like many “warm climate” cultures)? If a culture values communal thought, an individual breaking the unspoken rules of the community will face serious repercussions.
• In the culture, is it more important to “save face” (as in an honor-based society like the Middle East) or tell the truth at all costs (Western mindset)?
• Does your culture value invention or tradition? The two aren’t necessarily mutually exclusive, but usually cultures trend toward one or the other. This also affects your characters’ mindsets toward change and potentially radical thought.

• Fiction writers in the historical genres are particularly guilty of these offenses, but I’ve seen it in every genre. Either the culture does not have clear gender roles (most common in speculative worlds) or there are not appropriate repercussions for a character acting outside of gender roles (historical/contemporary).
• If there are gender roles in a fictional society, often they are inconsistent with the value system of that created society. Make sure it makes sense within the bigger picture of your world!

• Every culture has a religious belief system that affects how they view themselves and their place in their world. Even atheistic cultures, though they’d probably deny it. Religious beliefs play an important role in rite of passage, birth/death ceremonies, holidays, etc. Your culture’s religious beliefs should affect every facet of their society.
• Your character’s actions should also be shaped by their belief. Whether a person believes in fate or free will, karma or themselves as god, will drastically shape how they respond to others. Create their home world accordingly.

• Sensing a theme yet? You can make up whatever rules you want, but then you have to stick by those rules. Those rules can’t break your other rules. Those rules have to be consistent with the environment and value/belief systems you’ve established. If you’re going to break an established rule, you have to set it up from the beginning and have reasonable cause.
• The #1 rule of world building is, “Does it work?” Would the culture you’re portraying actually function as a society? If not, if you’re missing any of these key components, you still have some work to do.

At the end of the day, remember that cultures are systems created for a purpose, but they are also systems created by people. And people shape culture just as environment shapes people. You can’t have one without the other.
People can’t get around without tuk tuks. But then, tuk tuks wouldn’t exist without people.

One thought on “There’s No Ketchup in Fairyland: 5 Common Errors in World Building”