Today on the blog we welcome Michelle Levigne. Let’s delve into her mind, shall we?

What are you most looking forward to for this year’s conference?

Spending time with people who completely understand all facets of where I’m coming from. Not split between writers or science fiction people or church people, but all three merged together. Until you’ve had your roommate at a Christian university tell you that there are demons in the apartment because of your science fiction books, or have a teacher at your Christian high school tell you Christians shouldn’t read fiction, much less write it, because “all fiction is lies,” then you really don’t know how this weekend recharges my batteries.
Will you be coming in costume to the Awards Banquet?

Unsure yet. I’m trying to figure out how to handle the makeup for a Khybor from my Commonwealth Universe.  Glitter glue just won’t cut it. I want it to be really cool – and something I can wear to the genre dinner at ACFW in Nashville without having someone come after me with holy water and incense. (see answer above)

How many books do you own?

Last count (Yes, I have a list in my computer, so that if there’s a fire I can try to replace everything with insurance $$) around 1,200 print books – 80-some in my to-be-read shelf – and over 600 e-books between iBooks, Kindle, and Nook. Sadly, a lot of the e-books are also waiting to be read. A lot of them were free, or I got them for research purposes, or because friends wrote them. I’m lucky to read one book each week!

If you could visit anywhere in the world, where would you go?

Greece. I was addicted to Greek mythology in elementary school and junior high, and would love to see all the places where so many of the stories were set. Especially, I would love to visit Kephallenia, which is supposedly the actual location of Ithaka in “The Odyssey.” I wrote a book about the events of “The Odyssey” from Penelope’s point of view.

Would you rather live in Middle-Earth, Tatooine, or aboard the Starship Enterprise?

Consider this rationally – no electricity, print books, movies or indoor plumbing in Middle-Earth. While it might be cool to be a Rider of Rohan, with my luck I’d get stuck in the stable. Or have Orcs in the back yard. On Tattooine, it sounds like you have the choice of desert, rock canyons with bandage-wrapped mutants running around, or the space-equivalent of Tortuga, full of smugglers and criminal chieftains. Nuh uh. Then there’s the Enterprise. WHICH Enterprise are you talking about? Archer’s Enterprise. Pike’s

Enterprise. Picard’s Enterprise. Or the choice of new Kirk or classic Kirk. Think about the survival rate of the “new kids” – if you’re not the Bimbo of the Week, then you’re probably a Redshirt. If I’m on the Enterprise, can I hang out with Dr. McCoy? At least I’ll have a doctor close at hand when something awful happens. Reminds me of a filk song a friend wrote, set to the tune of “A Policeman’s Lot” from “The Pirates of Penzance.” When constabulary duty’s to be done (to be done) a Redshirt’s lot is not a healthy one … Thanks, but I’ll take MY ship – the USS Defiance, NCC 1717.

How did you get into writing?

I was addicted to daydreaming, and got into the habit of rewriting the TV shows I had seen, so I could be a character on the show, or add to a favorite book I had read, to keep the story going. My roots are in Star Trek, and started doing fan fiction. The short version of the story is that I saw a pilot movie for a TV show in high school and kept playing with the storyline, and I had to get it out of my head because we had semester exams coming up. Very hard to study when you’re creating adventures for your heroine. Previous attempts at writing had always killed the story after a dozen pages or so, but this particular story kept going. I wrote that book for two years, then took the correspondence course from Institute for Children’s Literature, then took creative writing courses in college, then got into fandom, where I saw my first published stories.

What was the inspiration behind your most recently published work?

My newest book as of this date  is “Odessa Fremont,” the prequel to my Steampunk series, Guardians of the Time Stream. I actually wrote the next book, “The Blue Lotus Society” first, but I made so many references to Ess’s back story in “Lotus,” that I realized I had to write her previous adventures. “Lotus” has its roots (agg, bad pun) in an anthology I was invited to participate in maybe 10 years ago, dealing with aliens from the Orion star system surviving on Earth, with an Egyptian or Incan influence. The blue lotus of the story was a crystalline lotus that controlled all the other crystalline pieces of an enormous machine that had been disassembled by ancient astronauts when they crashed on Earth centuries ago – and now their descendants are trying to find the pieces and reassemble it, to make contact with the homeworld. (Anthology was never published) I had all the pieces hidden in Egyptian artifacts. Fast forward to about 4 years ago when I was searching through my notes for bits and pieces for a story, to try my hand at Steampunk. I incorporated the Egyptian artifacts and the blue lotus and the pieces of the machine – only now it’s descendants of two groups of time travelers, trying to find the pieces of the time machine. Ess/Odessa is the long-lost granddaughter of the leaders of the “good guys,” and one of the few people able to control the lotus. At the start of “The Blue Lotus Society,” she is a Pinkerton, helping to guard a traveling exhibition of Egyptian artifacts, sent by Her Majesty’s government and the British and Cairo museums. So, her book, the prequel, tells the story of how she runs away from boarding school, saves President Lincoln’s life, works for the Secret Service, joins the circus, and becomes a Pinkerton at age 17.

Why do you write Speculative Fiction? What draws you to it?

<cue soundtrack> It’s the Final Frontier … no seriously, the possibilities are endless, and the tools and toys unlimited in science fiction and fantasy. Storylines that would be really hard to write in today’s society, or would require a whole lot of research to be historically accurate, are easier to write in futuristic or fantasy/medieval-type settings. For instance, I had an idea for a “showdown” story between a rich, powerful man, a robber baron type, and the daughter stolen from him before birth. While it would be pretty hard to get away with kidnapping the girl, holding her prisoner while indoctrinating her into his “philosophy” in a modern, Earth-bound setting, a galaxy-spanning civilization and dozens of worlds with varying legal systems and rules, and artificial wombs and space travel and all the attendant techo-wizardry, made it much easier to stage. The storyline wrote itself once I figured out the culture of the space pirate father – it also helps to have a science fiction universe that was assembling itself … The crux of the story was the choice of “gain the world and lose your soul.” Set in an SF universe, you could throw in so much more power, and so much more danger and insecurity to overcome, where the temptation is even stronger to give in and do it “Daddy’s way,” just to be able to protect those you love. I couldn’t have written that story set in the modern US, not without going really dark and having to invent underground fortresses and kidnapping and the logistics of trying to convince this girl that she’s better off becoming a criminal mastermind.

Thanks for talking with us, Michelle! 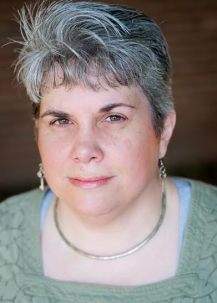 On the road to publication, Michelle fell into fandom in college (a recovering Trekker), and has 40+ stories in various SF and fantasy universes. She has a BA in theater/English from Northwestern College and a MA focused on film and writing from Regent University. She has published 60+ books and novellas with multiple small presses, in science fiction and fantasy, YA, and sub-genres of romance. Her official launch into publishing came with winning first place in the Writers of the Future contest in 1990. She has been a finalist in the EPIC Awards competition more than thirteen times, winning with Lorien in 2006 and The Meruk Episodes, I-V, in 2010. Her training includes the Institute for Children’s Literature; proofreading at an advertising agency; and working at a community newspaper. She freelance edits for a living, but only enough to give her time to write.